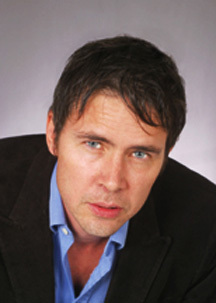 A YEARNING FOR DIRT AND POWER

The Adventurer, Hegel Scholar and Novelist Stefan Sullivan on Siberian Shamans and the Mysticism of Buxtehude

What did you do in Russia?

When I first started in the field in the late 1980s, Russia expertise was largely restricted to defense policy and the inner workings of the Kremlin. After the collapse, suddenly there were opportunities for entrepreneurs, journalists and ethnographers. While still in graduate school, I was hired by a London-based NGO that dealt with ethnic conflict in the region. This took me to the most remote corners,including Abkhazia and Tuva, near the Mongolian border. Then along came the free market boom. I quickly finished my PhD and got into the Russian automotive business.

In the second novel of this collection, "Diary of a Cowboy Outfit,"you mention at least 10 shadow companies that were incorporated in the business. What did you guys sell?

Mainly Mercedes dump trucks to the oil and gas industry. But we had our hands in a lot of pies. It led to a few dramatic situations.

In what sense dramatic?

For example, the Izhmash Kombinat produced not only motorcycles - that we wanted to import to Latin America - but also the AK47 assault rifle. The export manager handled both portfolios so he casually suggested an arms deal. It was a little out of the blue. We wisely refused to go there.

Judging by your novels, you had a good time in Russia.

In the capital of Yakutsk, I dipped into many sub-cultures that touch on a theme of the book, the fractured legacy of shamanism in the arctic. The Shaman is a healer, a musician, a prophet, a guardian of the heritage, and sometimes, a bit of a charlatan and mischief-maker. He wears many hats. It was a lot to absorb.

Why did you go to Siberia, and not to Moscow?

I wanted to get to know the Siberia that socialist realism conveyed with so much awe and wonder. After a fairly intellectual period, it was maybe a willful regression into childhood, or a regression toward a raw masculinity: Heavy Industry, Dump Trucks, Metal, Dirt and Power. That had also excited the great poet, Mayakovsky. It was a fascinating experience.

You recently wrote a work of nonfiction.

It's called "Marx in a Post Communist Era: On Poverty, Corruption and Banality". In Russia, I saw the consequences of a free markets without a safety net - exploitation, class conflict, brutal poverty.

The narrator of "Platon's Tundra" praises at the end the "ecstatic" moments in life that lend themselves to a literary treatment. you also mention the ecstatic elements within Western Christianity.

"The Final Slum" is the English working title of "Sibirischer Schwindel". "To slum it" means: to immerse oneself in hardship, not by necessity, but out of a sense of adventure. If you've done the final slum, then you can go back home. My narrator realizes at the end that there's a lot of ecstatic beauty in Christian art, in Bach for example, or the more austere mysticism of Buxtehude, the organ composer. You don't always have to travel very far.

(translation and edit by Stefan Sullivan)